Robert Tanner, MBA/Last Updated Dec 28, 2021
The classic leadership book, The Prince, noted how hard it is for leaders to introduce change. IBM made the same observation in a global CEO study. Not much has changed in 500 years! Click To Tweet

Over 500 years ago, the Italian diplomat and philosopher, Niccolo Machiavelli, observed how hard it is for leaders to introduce change. In this quote from the book commonly attributed to him, The Prince, Niccolo states the following:

It ought to be remembered that there is nothing more difficult to take in hand, more perilous to conduct, or more uncertain in its success, than to take the lead in the introduction of a new order of things, because the innovator has for enemies all those who have done well under the old conditions, and lukewarm defenders in those who may do well under the new. This coolness arises partly from fear of the opponents, who have the laws on their side, and partly from the incredulity of men, who do not readily believe in new things until they have had a long experience of them.  Niccolo Machiavelli – The Prince

Not much has changed in these 500 years. Implementing change is still hard!

IBM noted this much in one of their own studies. In their third biennial Global CEO Study, the Enterprise of the Future, IBM conducted 1,130 interviews with chief executives, general managers, business leaders and public-sector heads.

How did these global leaders rate their own ability to guide change in their organizations?

Here’s the short version: these CEO’s expect much change ahead for their organizations and many of them are less confident about their own abilities to manage the changes that are coming.

So, our human history shows us that effecting change is hard — no matter what century you live in!

This leads to the question why do change efforts fail?

There are many factors that cause change efforts to fail.

It can be one or a combination of variables such as resistance to change, ineffective process, lack of institutional support, poor timing, and so on.

Ultimately, however, change efforts fail because of poor leadership.

Why do change efforts fail? Failure begins with leadership's inability to make a believable case why change is necessary AND beneficial. Click To Tweet

Some organizational leaders don’t always see it this way however!

When their change and innovation efforts fail, organizational leaders can fall into the trap of blaming others for the failure. You can see the blame game starting in an organization as leaders form a circular firing squad.

Once the firing squad is formed the verbal attacks begin:

As these managers attack each other, you will often hear them offering familiar myths as reasons for the failure of a change effort:

The truth is that people do not resist or fear change that they believe is in their best interests.

If people are resisting your efforts to make change, it means that you haven't been able to credibly show them why what you want to do is better than what they are doing already. Click To Tweet

What Happens to an Organization When Change Efforts Fail

The consequences of a failed change effort are significant — significantly negative.

When leaders are ineffective at implementing change and innovation, employees and teams react negatively. Negative behavior includes some combination of the following:

What Happens to an Organization When Change Efforts Succeed

The consequences for a successful change effort are also significant – significantly positive.

When leaders are effective at implementing change and innovation, employees and teams react positively. Positive behavior includes some combination of the following:

1. Morale increases (people feel good about what they are doing and where they work)
2. Absenteeism decreases (people look forward to coming to work)
3. Organizational turnover occurs less frequently (people want to stay in an organization that is doing good and interesting things)
4. Productivity improves (enthusiasm to meet the change and innovation goals spreads among employees)
5. Teams collaborate openly and honestly (people believe what they are doing is beneficial to the organization, to their teams, and to them personally as well)
6. Organizational stakeholders resist the change less often (people are supportive of the change in general so resistance only comes when inconsistencies arise with the shared vision)
7. Gossip, backbiting, and rumors decrease (people support the change and leadership’s direction so they have little to criticize)

So, like most things in the workplace, it all comes down to the leadership. Change efforts fail because of leadership. It often is not leadership intent that is lacking, it is the execution that is the problem. 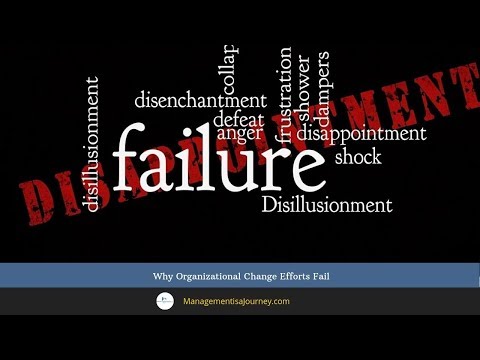 Where change is concerned, the Devil is in the details — and details matter. Click To Tweet
Written by Robert Tanner | Copyrighted Material | All Rights Reserved Worldwide