Five Whys – Act Like a Child and Improve Problem Solving

The natural masters of creativity and innovation are children. It turns out that children know something about problem solving too!

And to prove that children are so smart at what they do, you need look no further than the fifth largest company in the world by revenue. It turns out that children by nature use a popular problem solving tool that the founder of this company instituted to improve his firm’s manufacturing processes. 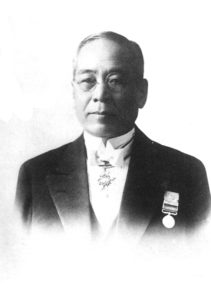 I am referring to Toyota Motor Corporation and its founder Sakichi Toyoda who is often referred to as the father of the Japanese industrial revolution.

So, what did this brilliant businessman have in common with children everywhere?

Sakichi Toyoda and children everywhere all know the value of asking the question, Why, over and over again!

Sakichi Toyoda made the question, Why, a popular tool for organizational problem solving with his Five Whys Analysis. This tool is used in lean management and six sigma to conduct root cause analysis.

And, again, it’s something that kids everywhere do naturally as they make sense of their world!

If you are a parent, grandparent, or have worked with small kids, you’ve seen this behavior.

It begins on any topic that your young child wants to talk about: Why is the sky blue? Why do you have to go to work? Why can’t I . . . (you can fill in the rest)?

You provide the first answer and then to your regret the cycle of follow-up “why” questions begins on whatever answers you provide. As you respond to an endless cycle of “why” questions you think to yourself: How did this all get started?

You might as well commit to answering the questions until something else grabs your child’s attention. The next time this occurs however you can comfort yourself with the understanding that you might be helping your child go on to establish a global multi-national firm with 364,445 employees worldwide.

For organizational problem solving, one of your greatest tools for effective leadership is to ask WHY. Click To Tweet

So, What is Five Whys Analysis? 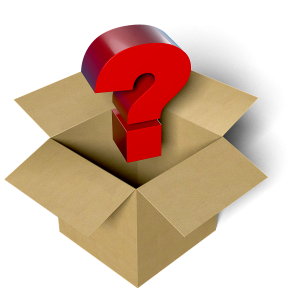 This natural tendency of children to ask a general question and then further explore it for deeper meaning by asking follow up “why” questions is the core of the Five Whys Analysis Tool.

As a manager, you raise an operational problem and then you ask your team and other affected stakeholders the question, Why, five more times.

As you do this, you find richer information for the problem you are facing. The Five Whys Analysis helps you to dig down and really understand the root cause of organizational problems.

Why are children so creative and innovative? Because they always ask WHY! Are you asking WHY enough? Click To Tweet

How Does Five Why Analysis Work? 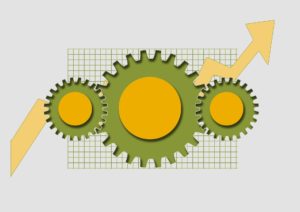 Let’s say that you are a middle manager and one of your more experienced supervisors, George, quits his job.

You know George was unhappy with your support of the company’s decision on a major software change that is affecting all of your units.

But, you did not expect him to quit over it. You think to yourself: That George sure hates change!

You can accept this first conclusion that your mind has quickly accepted. Or, you can do a Five Whys Analysis to get to the root cause of why George really left the company.

After consulting some knowledgeable people and probing further for additional information as necessary, your conclusion begins to evolve as follows:

2.       Why did George not want to change? Because he was too invested in the old and inefficient way of doing things.

4.       Why was George able to understand the old way of doing things and do his job? Because he’s worked here forever!

5.       Why did George work here forever? Because he was able to grow with the company and take on new responsibilities.

Your Five Whys Analysis has given you a better perspective on why George left the firm.

While George may have been resistant to change, he ultimately left because he no longer felt he could grow with the company and take on new responsibilities.  From George’s perspective, his reaction to the changes occurring around him was not irrational.

By doing a Five Whys Analysis, you have gone beyond an obvious conclusion to find the real source of the problem. With this new perspective on why George left, you can use this information to help prevent future organizational turnover with your other valuable employees.

As you think about this issue, you realize that it was the manner in which the change was occurring — NOT the change itself — that made George fearful and frustrated and forced him to leave the organization.

Five Whys: Ask WHY enough when you encounter a problem and you'll eventually find your solution. Click To Tweet

In the future, to obtain organizational commitment and enthusiasm for organizational changes (particularly with your longer term employees), you realize that you will need to institute the change more carefully next time with an unfreeze-change-refreeze  approach.

The value of Five Whys is it can move managers beyond labeling and generalities as they determine the root causes of interpersonal and operational problems in the workplace.

The story of Frank is a simplified example. In practice, however, many of the most pressing problems in an organization often come down to simple reasons. As King Solomon said: It’s the little foxes that spoil the vine.

To use Five Whys Analysis appropriately, you need supporting data that provides sensible answers for each Why question. Without including supporting data, Five Whys can become a subjective tool for managers to see what they want to see.

Including supporting data with your Five Whys Analysis also helps to get a 360 perspective. This occurs because this approach often leads you to include other thoughtful organizational stakeholders in the Five Whys analysis — as they have the data you need.

Finally, using Five Whys with other tools such as the fish bone diagram further expands the power of this tool: 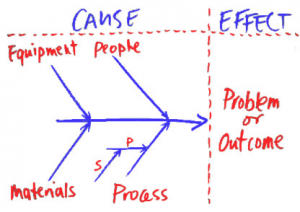 Managers can use Five Whys as one of their organizational problem solving tools. With it, managers can avoid the cycle of treating the symptoms of a problem instead of the underlying organizational illness that keeps producing the problems.

With Five Whys as a tool in your management toolbox, you can and should act like a child to improve problem solving! (Being childish has some benefits.)